IN THE MEANTIME PREMIERE ON UP! 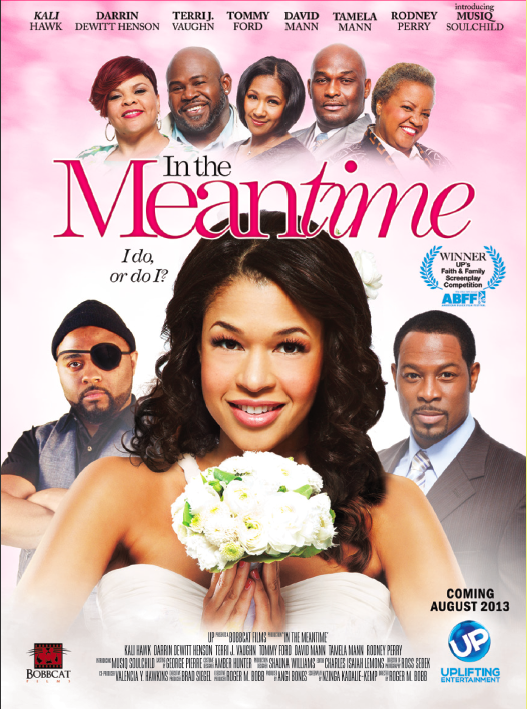 In the Meantime is the story of Jazmin "Jazz" Welles (Kali Hawk) a confident, educated woman who thought her path in life was all laid out in front of her. When she loses her job and her longtime aspiring artist fiance Blac (Musiq Soulchild) decides they need to take a six-month break from each other before getting married, Jazz loses direction. With Blac gone, Jazz is forced to move in with her very pregnant sister Nina (Terri J. Vaughn) and her husband Reverend Clay (Thomas Mikal Ford) and throws herself into endless activities in an attempt to find herself.  So when Nina recruits Jazz to teach an adult literacy program at a local community center run by the committed Sister Fay (Elisabeth Omilami) and her antagonistic daughter Felicia (Demetria McKinney), Jazz reluctantly agrees.  There, she is paired with Kwame Davis (Darrin Dewitt Henson), an attorney focused on career advancement, also reluctantly volunteering his Saturdays in an effort to please his boss. Jazz and Kwame work together to find new and creative ways to engage their students including, Minnie (Tamela Mann), a grandmother who yearns to read her Bible and be able to read the karaoke screen with her grandchildren; BJ (Rodney Perry), a West-African who is working to obtain his US citizenship; and Frankie (David Mann), a former R&B artist who wants to stop relying on his children to get him through his daily tasks, like reading a menu. As the two teachers guide each student toward individual success, they find themselves personally inspired and drawn into an unlikely friendship that surprisingly blossoms. What started out as a chore becomes an uplifting journey for both.  With Jazz's relationship break set to expire and Kwame's partnership at the firm speeding forward, both Jazz and Kwame find their lives changing in unforeseen ways.

"We were very excited to introduce this smart, funny, well-acted film at this year's ABFF in Miami, since it was the winner of last year's UP Faith and Family Screenplay Competition," said Brad Siegel, vice chairman, UP.  "The overwhelmingly positive audience response at the ABFF world premiere screening was thrilling for those of us attending, particularly winning writer Nzinga Kadalie Kemp, director Roger M. Bobb and cast members Kali Hawk and Darrin Dewitt Henson.  In The Meantime represents the depth of talent and kind of entertaining, contemporary and faith-friendly stories that we develop and share with our viewers.  We are continuously inspired by the quality of writing and storytelling we are getting from the young, up-and-coming writers that are entering scripts in the competition."

"In The Meantime is a simple story that mirrors everyday life in so many ways, and, that's a significant part of what drew me to this script," said Roger Bobb.  "Jazz thinks she knows true love. However when she expands her definition of what love truly is, through helping others and rekindling her love of community, family, and her faith, she discovers the strength and the foundation needed to change her life. Telling stories like this never gets old, and I feel blessed to be a part of the creative team and to be once again working with UP to bring this wonderful story to life."

In the Meantime is the second UP Original film to trace its roots to a grand prize-winning script at UP's annual Faith and Family Screenplay Competition at ABFF in Miami.  In 2012, UP's World Premiere Movie Raising Izzie  was the first film to win the competition.  Based on David Martyn Conley's screenplay, the film premiered one year after its win at ABFF and set ratings milestones for the network, ranking number one in its time period among African-American adults 18-49 and women 18-49 among all ad-supported cable networks.  UP's Somebody's Child, from screenwriter Siddeeqah Powell, won honorable mention that year and also boasted strong ratings, ranking second in its time period among all ad-supported cable networks in the key African-American demos of W25-54 and W18-49.

Bobb's directorial debut film, Raising Izzie received two NAACP nominations. He formerly served as executive vice president of Tyler Perry Studios where he produced the acclaimed feature drama For Colored Girls as well as the hit comedy Madea's Big Happy Family. His numerous feature co-producing credits include Why Did I Get Married Too?, I Can Do Bad All By Myself, Why Did I Get Married? and Madea's Family Reunion. On the small screen, he serves as executive producer and director of "The Rickey Smiley Show," he executive produced and directed numerous episodes of the hit television series "Meet the Browns" and served as supervising producer and director of select episodes of the long-running sitcom "Tyler Perry's House of Payne." Bobb has won six NAACP Image Awards and he is the only two-time winner of the Best Film Award at Film Life's American Black Film Festival.

Follow our cast and music soundtrack artists online at: