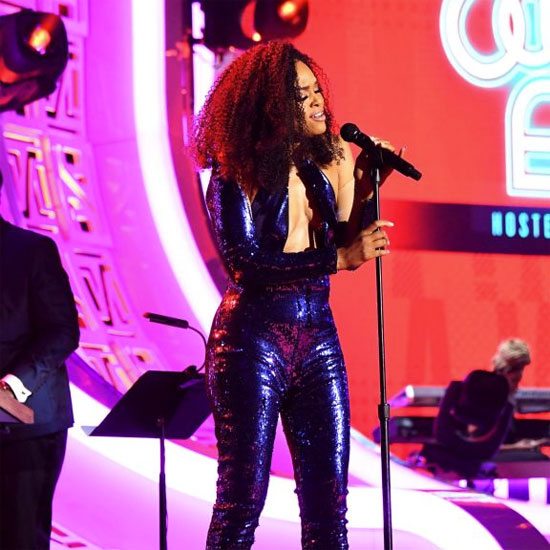 We're not sure if three-time hostess Erykah Badu has anything to do with it, but the Soul Train Awards have been showing the '90s some serious love in recent years. Last night's telecast was no different, with divas like SWV and Toni Braxton proving they still got that fire. Yet, in an evening full of throwback greatness, rising star Demetria McKinney made the most of her brief time on stage with a smoldering performance of "Easy" as one of the Soul Sessions spotlight artists.

Taken from her long-awaited debut album Officially Yours (which dropped just last month), the actress/singer cooed a brief intro before delving into the song's second verse. Wearing a slinky, sequined navy blue catsuit with strategically-placed peek-a-boo cutouts, it wasn't hard for her to keep our attention as she schooled the audience on the art of romance. We kinda feel like the song was a bit too "safe" of a choice given her limited screen time, but she definitely sounded good. It's unfortunate that we didn't get to hear/see more since the show cut to commercial just as her vocals began to soar. Thankfully, we know this isn't the last we'll see of Ms. McKinney.

Article by: B. Cakes