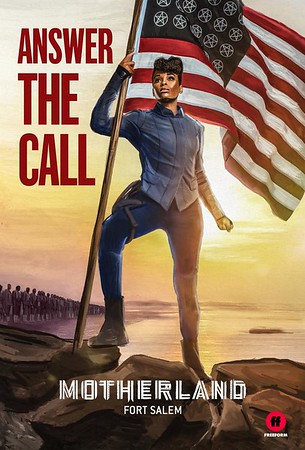 Demetria McKinney loves the motherly force her character brings to Motherland: Fort Salem and more as the star joins our AfterBuzzTV Motherland aftershow

Motherland: Fort Salem fans were in for a huge treat on our after show when the absolutely lovely Demetria McKinney joined us to talk about episode eight.

Mckinney plays our tough (but still sweet) drill sergeant Sergeant Anacostia Quartermaine. Quartermaine is as furious as her mentor, General Alder. Our after-show fans had their questions for Demetria, and had to be heard! A popular question the chatroom had was this: Demetria has had some pretty insane roles to play in this series, including interrogator.

McKinney had an extremely intense interrogation scene with co-star Amalia Bjelke. All of us on the panel, and our fan, wanted to know what Demetria herself goes through when acting as such a powerful character.

In the scene, Anacostia intensely questions Scylla Ramshorn (Bjelke) – about the Spree. And Demetria tells us, it wasn’t easy! Saying,

“We met together at the test shoot. We were hired the same day, within minutes of each other. We were sitting together when we got the call, we developed a bond within the waiting room before we got the audition done. And, so, to be in that scene with someone I absolutely adore as a person and as a talent. And to have built this world from the very beginning and now I have to torture somebody… it was intense…”

McKinney has loved all the roles she’s been able to play in her career. They have all been incredibly strong people, but strength isn’t always portrayed in the most typical ways.

That is what our favorite drill sergeant loves about her character. Her vulnerability. Demetria explains that is where her character shines. Saying,

“With the work I’ve done over the years, I’ve played some really cool characters… This is one of the very first characters that I’ve ever played where her strength was developed through her vulnerability.”

McKinney has learned a lot through Sergeant Quartermaine. She realizes that Anacostia doesn’t know everything.

The best qualities of Demetria’s character are the many layers within Anacostia. She says the fans love “her militant nature. You love the disciplinary factor of it, but once she starts to come into the mother bear and the more matronly role that she’s in, you really get a better appreciation for the human that she is. And I absolutely love that about her. I’m a single mama. My son is grown, hallelujah!”

If you love Demetria Mckinney and Motherland:Fort Salem like ABTV Loves Motherland: Fort Salem Weekly, share this article with a friend. Tune in daily to AfterbuzzTV for articles, aftershows, and all the latest news on the world of entertainment.